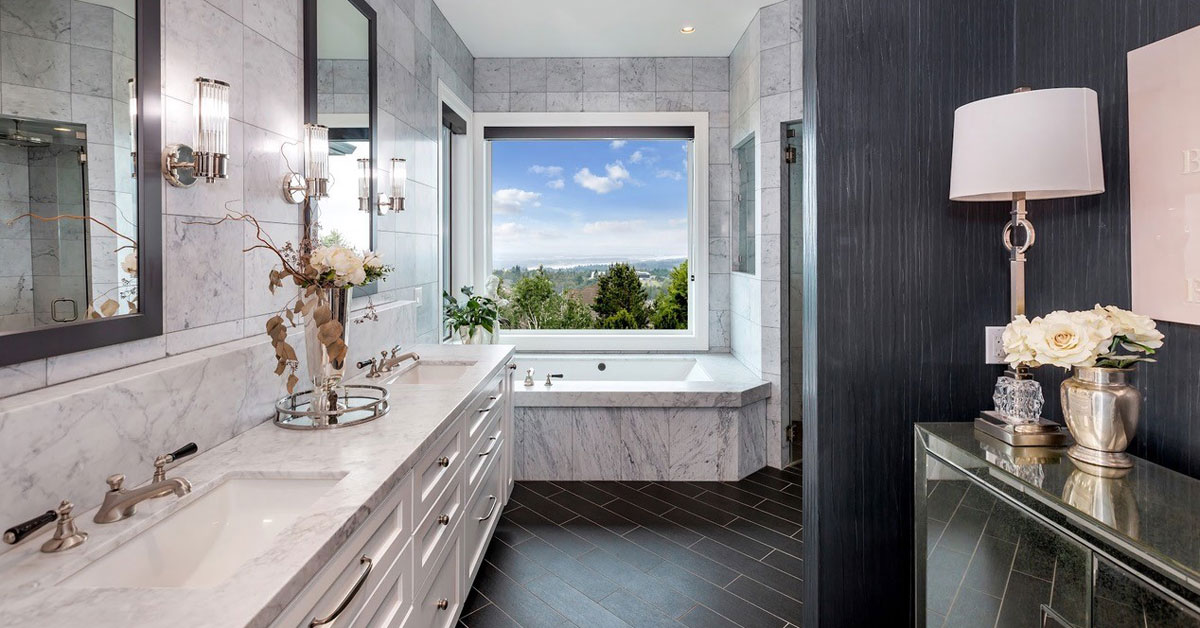 One of the biggest questions we hear is, ” how do I take care of my granite counters after they’re installed?” This is an excellent question, and I’m happy to say the answer shouldn’t be daunting.

Caring for your new countertops falls into two parts:

A) Preparation of the granite at or before install.

B) General cleaning and maintenance after installation.

So let’s talk first a little about sealing natural stone.

The number one most important aspect of keeping your granite in tip-top shape is the initial sealing process. A high-quality sealer should be used, and it should be applied appropriately. At AMG, we’ve watched as the technology used in natural stone sealers has changed and advanced. Over those years, we’ve used a few different sealers on our counters. Our sealer of choice now (and has been for several years) is Tenax ProSeal. It repels both oil and water and is made by Tenax. This company produces most of the topical products used in the majority of natural stone quarries around the world. 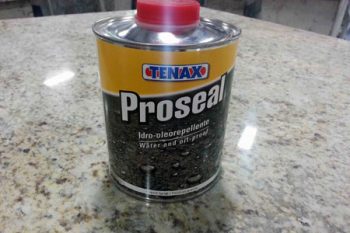 Our Sealer, ProSeal by Tenax

Not the cheapest sealer by any means, it has performed very well (zero problems) for us since we added it to our repertoire. Generally speaking, sealing stone is very easy to do yourself once the initial seal has been applied. Later I’ll discuss future sealing, how it’s done, and how often, but first, let’s talk about that first initial sealer application.

The first seal needs to be applied to clean and dry stone; it also needs to be applied liberally and in two applications. We chose to seal our counters in a dust-free area of the shop where we can be as liberal with the sealer as we want to be. After all, shop floors don’t care if they have sealer dripped all over them.  With that said, the first application is applied very heavily and then allowed to sit for 20 minutes and soak deeply into the stone. 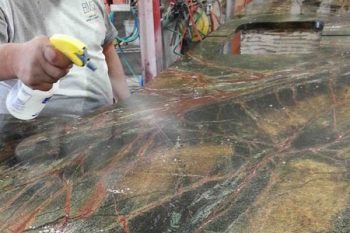 Saturating the stone with sealer

After the first “super-soak” of sealer has had its time, the second layer of sealer is applied to fill in any voids that may have soaked past the surface during the first application. This is allowed to soak for a few minutes, and then the surfaces are hand buffed off. Because of this intensive first seal, future sealing becomes much easier.

When and how to seal in the future:

Most sealers today last anywhere from 5-15 years before another application is required. An easy way to tell when you need a new seal is if you notice water penetrating the stone and leaving temporary dark spots. For instance, if you have a glass of ice water sitting on the stone and after you lift it, you see a dark ring than this is an excellent rule of thumb that it’s time to re-seal all of the counters.

As I mentioned earlier, on account of the thoroughly deep initial sealing process, this future seal is not nearly as messy and complicated. Simply pour a small amount of sealer (which can be purchased through us, a $30 container will last you for darn near the rest of your life) onto the counter and spread around to cover the area with a lint-free rag. Allow to sit for a couple of minutes and wipe back off with another lint-free cloth. Continue around the counters until all of the surfaces have been sealed.

And that’s it! You’ll be protected from stains for several more years. Easy right?

Now, as far as general cleaning is concerned, the primary rule of thumb is not to regularly use something extremely high in acids or alkaline. Don’t swing extremely to either end of the ph scale.  Mild soap and water are, of course, fine as is most common household cleaners. What about using something like vinegar and water? No sweat. But using straight vinegar, please don’t. What about using a cleaner that has bleach in it? Sure, no problem. But using straight bleach, nope. You see, granite and other natural stones have an abrasive polish. Meaning that the surface is literally polished starting with low grits and continued through to high grits until the surface has a natural sheen. Acid and alkaline, when regularly applied in high strengths to a natural polish, can etch the polish creating a slow dulling of the luster. Also, avoid oil-based cleaners, they’ll just leave the surface oily. No abrasive cleaners either as they can also begin to dull the natural polish over time.

Generally speaking, though, granite is an incredibly durable surface, that with a little common sense, can be easily cared for and hold it’s beauty longer than almost any other counter surface available.

We love to hear from our customers, let us know what you need and we’ll be sure to get in touch.